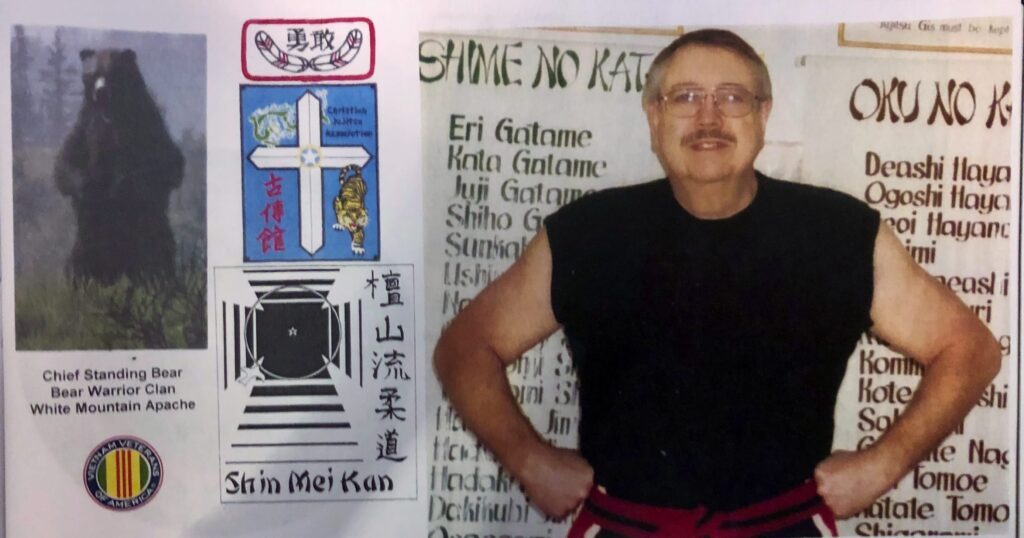 Gene Edwards was promoted to Shodan by Prof. Estes 12/2/59 at age 16. He was baptized and accepted Christ at age 14. Gene ran the Orland Judo Academy for many years and entered several Judo tournaments. In the 60’s he practiced with Joe Luce, Danish Natl. Judo Champ, and Insu Han, Korean Nat’l Judo Champ. He studied Shotokan and incorporated modified forms back into the system as Master Okazaki had done originally. Gene studied with Prof. Estes extensively in the 60’s and continued in special classes with him later, including many private lessons. He was promoted to Professor and 5th Black by Prof. Estes in 1978. The CJA promoted him to 8th in 1996, and the USMA recognized him as 10th in 2010. Prof. Edwards has a B.A., M.Ed., and Ed.D. degrees plus teaching, psychologist, counseling and administrative credentials, serving in the California public schools over 20 years. During that time he earned many awards such as Teacher of the Year (out of 53 North Bay schools), and State Mentor Teacher. He started the Okazaki Do of the Philippines during the Vietnam war, and studied Filipino knife with Magno, a WWII jungle fighter and master of Kali. He also studied with Prof. Florendo Visitacion, a JuJitsu and knife master. After Vietnam, he started the Calistoga JuJitsu Institute and hosted the first AJJF Black Belt convention in Calistoga. He organized the Okazaki Biographical Research Team and went to Hawaii to conduct extensive historical research on Master Okazaki in 1978. He became friends with Hiro (Kishimoto) Imamura, Japan Nat’l Karate Champ, and studied with him. Prof. Edwards taught Danzan Ryu at Columban College, R.P., Cal. State Univ. Chico, and Napa College, as well as a Summer program at the Univ. of Illinois. Prof. worked with the AAU running several championships and receiving Nat’l. awards. He studied Yang Style Tai Chi Ch’uan under Sifu Myfanwy Plank (ca 1981), who had trained under Master Sing Wong Liu. TCC is important because (1) Prof Estes emphasized extremely slow practice movements for precision and Ki development, and (2) Master Okazaki studied Kung Fu and held his Kung Fu teacher (style unknown) in highest regard. In addition to DZR he studied Okazakl’s Asian Therapy methods with Prof. Estes, Herman Lugauer, L.Ac., and Hachiro Okazaki. He started the Shin Mei Kan with his wife Lora (also a Black Belt) in Middletown, CA, later moving it to Kalispell, MT. He and Lora established the Christian JuJitsu Association on May 5, 1994 (International Day of Prayer that year). He lost Lora to cancer in 2004 but continues to run the SMK and serve the CJA as the CEO. He has authored several texts and manuals for the CJA. He has been blessed by the 1000’s of wonderful students he has had over the years. Many have gone on to teach and carry on the tradition of DZR and the love of Christ. And so he is a “great grandfather” to many. Prof. is extremely proud of them all.