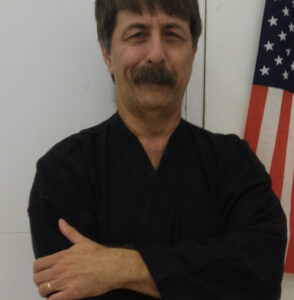 Jess was born in 1957 in Beloit, Wisconsin. He attended Calistoga High School in California and was an honor student. He started jujitsu with Professor Edwards in 1971. He entered and placed in many regional and national competitions and after a tour of duty in the Army, he returned to continue his jujitsu training. He earned a black belt in 1983 and continued to learn and teach DZR over these many years. In addition to his jujitsu Yodan, he earned a shodan in DZR Kempo in 1985. He served as an assistant instructor in the Calistoga Jujitsu Institute (now Asobikan Calistoga Jujitsu) until he assumed the role of school head in 1988.  Sensei Green was certified in Okazaki Restorative Massage and practiced professional in Calistoga until 2014. He continued his education at Sonoma State University earning a degree and a California Teaching Credential. He worked as a substitute teacher in both Napa and Sonoma Counties. Jess not only knew his subject matter well, but he found creative ways to instruct both children and adults in the complex skills of jujitsu. Furthermore, he has authored at least one Junior Course Jujitsu Manual.  Jess was on the AJJF Council of Senior Instructors and served as an instructor at the AJJF Kids Camp since 1984. He served as the executive Director for the Christian Jujitsu Association in 1996 and 1997. Jess also trained in Semi-e. He was inducted into the CJA Bear Warrior Clan of the White Mountain Apache in July 2021. Jess passed away on October 11, 2021. Jess was promoted posthumously to CJA Professor and Godan. He leaves behind his wife Lisa, his sister Lynn, and nieces and nephews.  We miss you my brother.