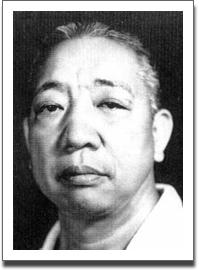 Founded in 1927 by Master Seishiro Okazaki, Danzan Ryu Jujitsu is an amalgam of many different fighting styles and techniques as well as oriental healing methods. Master Okazaki was born a 17th generation samurai in 1890 on the island of Honshu, Japan. In 1906 he immigrated to Hawaii and worked in the sugar cane fields until
he became ill with tuberculosis at the age of 19. Ignoring his doctor’s orders to rest, Okazaki sought the help of a Japanese martial artist and healer, Kichimatsu Tanaka. Following oriental healing treatments, Tanaka ordered Okazaki to take up his Jujitsu classes. Okazaki trained hard in Jujitsu for 6 days a week and eventually gained in strength and cured his condition. It was after this that Okazaki decided to dedicate his life to Jujitsu and the healing arts. Over the years Okazaki mastered other schools of Jujitsu, Karate, Judo, Filipino knife fighting, the Hawaiian art of Lua, Kung Fu from the 78 year old Chinese Master, Wo Chong, French foot fighting, and even American boxing and wrestling. Okazaki’s love of the martial arts prompted him to return to Japan in 1924 and master hundreds of techniques at over 50 dojos, including the Kodokan of Jigoro Kano (the founder of Judo). During this time, Okazaki also studied the healing arts of Kappo and Seifukujitsu and came up with his own unique healing form known as the Okazaki Restoration Therapy. He became extremely proficient in the art of healing and firmly believed that to be a complete martial artist, one had not only be able to defend oneself, but to be able to heal others. Okazaki was so well versed in the ways of healing he had many celebrity patients, including US President Franklin Delano Roosevelt, George Burns, Shirley Temple, Johnny Weismeuller, and Charlie Chaplin. Okazaki took all he had learned and distilled it into a system suitable for students of all sizes. His art, Danzan Ryu Jujitsu, was designed so that the smallest student would be able to take down the largest of aggressors. 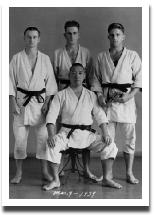