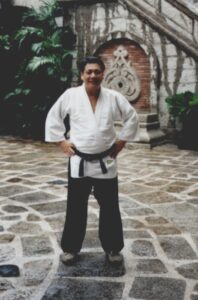 “He was a Teacher, a Father and a true Danzan Ryu Master.”

Sensei Rollie H. Tuazon was a teacher with an uncanny talent to bring out the best in his students. He was Jesuit educated having completed his Bachelors degree in Behavioral Psychology and Masters in School Administration as an exchange student at the University of San Francisco in California. He also earned an MBA degree, major in Human Resources Management, from the Pacific Northwestern University in Seattle, Washington, USA.

A teacher and healer by nature, Sensei Tuazon worked for 3 years as a Drug Rehabilitation Counselor in San Francisco, California during the mid-1970s. He contributed much in the field of education having taught in high school, undergraduate and graduate schools, in the Philippines and in the United States.

Sensei Tuazon’s passion for teaching was balanced by his equally deep passion to promote Danzan Ryu Jujitsu in the Philippines. His initial training in DZR was under Prof. Edwards at Columban College in Olongapo City in 1968-69.  A few years later Prof. Edwards arranged through the U.S. Congress to bring him to the U.S. to complete his studies.  He lived with the Edwards family while studying and Prof. Edwards promoted Rollie to Black Belt on 8 April, 1973.  Having no other involvement in sports except the martial arts, Sensei Tuazon also carried a blackbelt in Vee-jitsu, a brownbelt in Okinawan Karate and practiced aikido. He was a member of the American Judo and Jujitsu Federation and the Christian Jujitsu Association of the USA.

He actively practiced the arts of Dan Zan Ryu Jujitsu after 1973 as a Black Belt in the Calistoga JuJitsu Institute. After returning to the P.I. he was the designated head of the Philippine DZR. A great technician, he had a firm yet gentle approach to teaching the arts with a great attention to detail. His dedication to Danzan Ryu Jujitsu in the Philippines produced a Black Belt and senior students who will continue the Danzan Ryu tradition that was Sensei Rollie’s lasting legacy.

Sensei Rollie was married to Nenita Tuazon, and has a daughter and son aged 23 and 22, respectively. He was also a beloved father to his Danzan Ryu students.