“Remarkable and outstanding” – more fun than a “barrel of monkeys”. How can every camp be better than the one before? It must be the people who make it so! And this year’s camp was no exception! 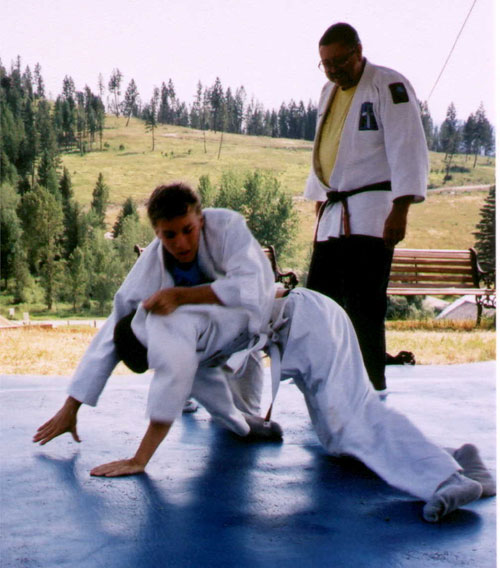 We had many of the regular and popular classes plus some new and exciting ones. We had the fun “spin offs” on the basic boards such as Yawara, Nage, Shime, etc., and Kempo Kata and Sparring, Kombo, Tanju, Tanto, Bo, Hanbo, Kombo, Bokken, Shuriken, Rifle and Pistol Range Marksmanship and competition, etc. 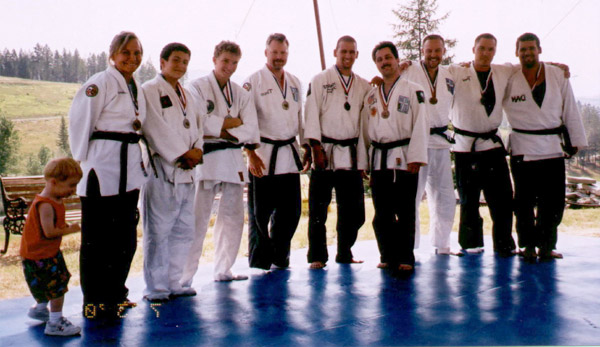 We also had a number of Judo Randori classes to prime everyone for the Judo Contest which was held on the 24th. By the way, it was a great contest! We had three pools (divisions) and the competition was lively. Many matches were won by some great Nage Waza. The winners in their respective divisions were: Lightweight (120-130#) 1st, Josh Sullivan; 2nd, Gabe Barbour; 3rd, Denise Driver; Middleweight (150-170#) 1st, Todd Driver; 2nd, Marcos Baca; 3rd, David Hallowell; Heavyweight (190-210#) 1st, Dan Baca; 2nd, Travis Sienknecht; 3rd, Ed Cope. Beautiful 3 inch medals with ribbons and certificates of placement were given to all of the winners. 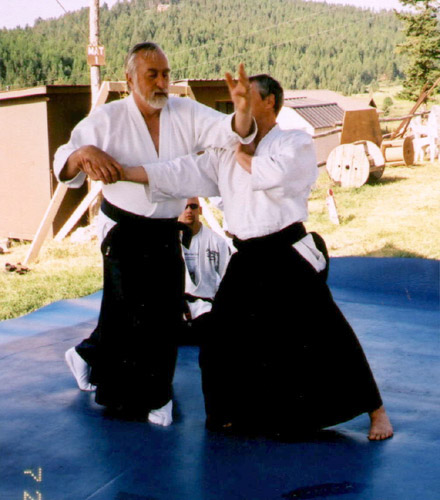 The highlight of the program was our guest instructor, Walther von Krenner, Hachidan and Aikido Master. He and his assistant Terry Schroeder demonstrated and taught a variety of great Aikido moves. Walther’s relaxed style and great sense of humor kept everyone focused. Both Walther and Terry were very patient and sensitive to the vagaries of the JuJitsu practitioner. Master von Krenner is one of the top Aikido Masters in the world and is in constant demand to teach advanced clinics all over the country. We were extremely fortunate and pleased to have both of these fine men at our camp. We presented Walther a large “Certificate of Thanks” signed by all our board members. He in turn presented Prof. Edwards a beautiful Japanese scroll. 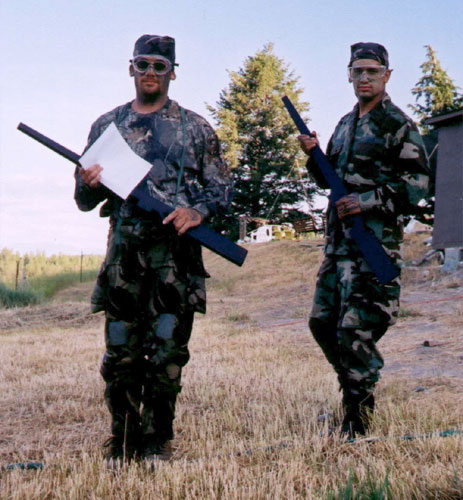 One of the more unusual classes offered was the “Stealth Movement Class”. After basic instruction and practice in cryptography, camouflage, stealth movement, topography, and how to take a bearing with a compass, the students were turned loose on the practical exercise. A stealth course was laid out in the forest, requiring multiple compass heading changes. At the end of each run was a poker chip that had to be retrieved. The first bearing was encrypted, and required that each team decrypt the message to find the distance and bearing. To make sure each team followed correct procedure, two “snipers” armed with paintball guns were hidden along the route. To make things more interesting, trip wires attached to cow bells served as “land mines”. Each team was scored on multiple criteria: location of insertion point from cipher, good camo application, overall time, etc. with points off for noise, poor movement, setting off mine, getting shot by paintball, etc. What made the course even more interesting was the appearance of a large black bear right in the middle of our course 2 days before the event. However this did not deter our intrepid JuJitsu teams. Each team did well in specific areas, with the last place team beating the others in certain criteria. But based on overall scores the placement was a follows: 1st Place (110 pts) Denise Driver & David Hallowell; 2nd Place (90 pts) Josh Sullivan & Gabe Barbour; 3rd Place (80 pts) Marcos & Dan Baca; 4th Place (50 pts) Cory Nauman & Jon Stineford. They all emerged from the forest tired, dirty, and full of “fire”. Special thanks to our two snipers: Ed Cope and George Lentz.

The other evening programs were super as well. After the movie “The Patriot” we had the special fireworks display. Following the Pledge of Allegiance to our flag and the Star Spangled Banner, we honored all our people who have served or are serving in the military, law enforcement, and fire fighting. Special thanks to Marcos and Dan Baca for running the fireworks. 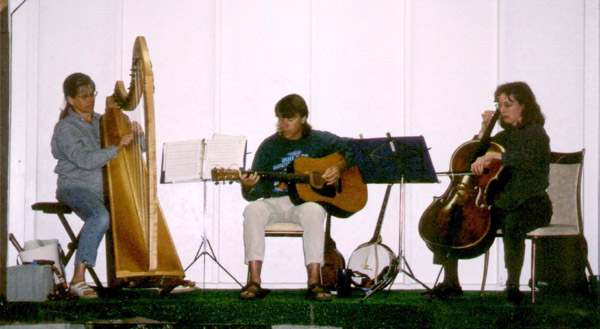 Another evening program that was excellent was the night we watched a “Knight’s Tale” on the Big Screen and then “Tra Le Gael” performed on our stage down at the campfire. Tra Le Gael is a local professional musical group that specializes in Celtic music. Deserving special mention was the Monday evening program where we watched Meggido on the large screen, followed by a presentation at the campfire by David Hallowell and Lora Edwards on the “Armor of God” – which was the theme of our camp this year!

This article only captures a few of the major highlights of the camp, leaving out many of the hilarious moments at meals, the water pistol fights, and all the fun comments and conversations! In short, camp was outstanding and more fun than you can imagine. If you missed out, you missed a great time!