As those of you who attended know, Camp 2001 was spectacular, a “once in a life time” experience, that will never likely be repeated. There were so many high points that we don’t think we can cover them all here. Of course the guest of honor, Hiro Imamura was great, as well as his father Tsunemi-san (a Japanese State Treasure!). The Black Belt exams the first Saturday went very well, with all five candidates passing: Lora, Cory, Dan, Marcos passing Sandan, and Todd Driver passing Yodan! Lora, Cory, and Todd were presented at Opening Ceremony, while Dan and Marcos were presented at campfire on Wednesday (they had a few paperwork items to finish). Following the exams we held the Instructor’s meeting and then the CJA BOD Meeting. While several items of importance were covered, one of the more important was the addition of a manager of contests, which was filled by Todd Driver.

The highlight of the evening was a catered sushi dinner on our deck for the Imamura family, and attended by most of the Black Belt instructors and several kyus. It was an excellent dinner and the Japanese plum wine provided by Jamie and George Lentz was greatly appreciated! A gift exchange was conducted in the evening with the Imamura family, and we were deeply honored by their gifts! Skip and I were presented hand carved tile “Protectors” by Tsunemi-san, a master in this art, and personally designated as a Japanese National Treasure. Lora was given a beautiful Summer kimono. 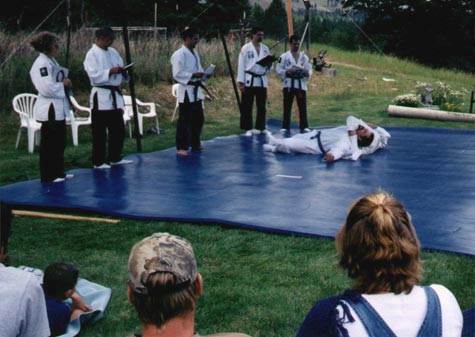 Sunday of course we started with a small group attending church, and then rushing back to camp to prepare for the contests. During this time Skip West accompanied Hiro and his family to a Pow Wow at Elmo, Montana. The Imamura family was fascinated by the Native American customs, dancing, singing, and attire. Since Skip is a native Seneca, he was the ideal person to serve as a liason. Skip also served as our contest administrator, making sure everything went smoothly, or else! After a brief official’s meeting, the contest started about 1:30 PM. The competition was excellent and the spectators and competitors all had a great time! After the contest we washed up a bit and headed into town for a Chinese (all you can eat) buffet dinner! We gave out Certificates of Appreciation to all competitors, and officials, and then formally introduced Hiro-san and his family to the campers!

Monday, camp started in earnest. Meditation started at 7 AM! At the opening ceremony we had promotions and a special presentation of a Scottish Claymore sword to Hiro-san. The sword was a replica of those used by Scottish warriors over 1500 years ago. Hiro’s class was the first of the camp and open to all. Since he had already given the CJA detailed information on sparring reaction training, all his courses were focused on fundamentals and improvement of form, focus, power, speed, and coordination. All three of his sessions were excellent and well received by the campers.

In addition to all the many and varied classes throughout the week by our highly trained and competent staff of Black Belts, we had range classes in knife throwing, shuriken, rifle and pistol. Of course participation in any of these required passing the range safety program. Also we had a lot of activity on the trampoline this year. Pool activity was limited due to the lower temperatures, but the hot tub was a screaming success! The movies were generally well attended, mostly because of the huge plates of pie, cookies, and ice cream consumed at this time. In spite of the Kamikaze yellow jackets at meal time, the food was great!

Monday night fireworks were pushing the envelope. While they were supposed to be class “B” ( the limit for private use), many of the mortars seemed to extend a little to far up and out – approaching the limits for professional use. We opened with the Star Spangled Banner, and an honor presentation of our military and former military folk from the CJA. Even the Sheriff showed up to see if we were done for the night! Ha!

Tuesday night we had a rain storm, so the campfire was canceled, and movies extended. Our honored warrior this year was Audie Murphy, the most decorated hero of WWII. Tuesday evening we watched “To Hell and Back” a dramatization of his war experiences. We also had many unique classes throughout the camp in addition to the regular “boards” and variants thereof. For example, Tom Berner, Gold Sash, taught several Tai Chi Ch’uan courses. Others included Bokken, Kendo, Shiatsu, Judo, Hanbo, Jo, Knife Defense and Sparring, Rokushaku Bo, CPR and First Aid, etc., etc. 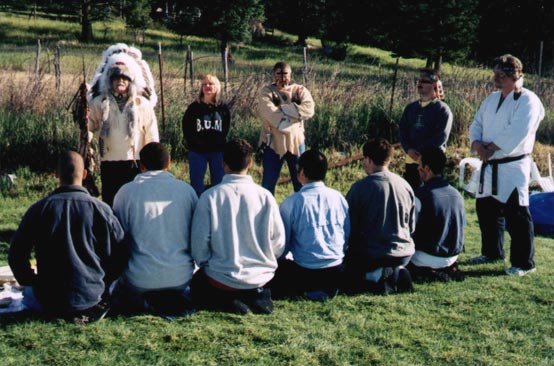 Wednesday morning early we had a special ceremony: the Bear Clan Warrior Society of the White Mountain Apache, and seven new members were brought in: Marcos, Dan, Cory, Brian, Hiro, and Curtis as warriors, and Denise as our “Clan Mother” (one of the most powerful positions in the clan). All were given their new warrior names, and gifts from the other warriors. “Initiation” occurred in the evening at the Indian Drum Tracking class in the forest adjoining our camp. Other important action included Standing Bear appointing Medicine Wolf (David Hallowell) as “Sub Chief”, and Grey Wolf appointing Thunder Hawk (Chris Andrews) as “Sub War Chief”.

A thunderstorm deferred the Astronomy and Orienteering class until after the Drum Walk! Several of us reacquainted ourselves with the major constellations and how to navigate by the stars.

Thursday evening was the campfire performance of a local group: Traole Gaol, which played ancient Celtic, Scottish, and Irish music. This was very appropriate, as it followed the showing of Rob Roy, a true story of a Scottish warrior and leader.

Friday morning after Hiro-sans’ last class, we took many family, individual, and group pictures. We presented the family with the hand carved bears (by Dan Walking Starr). After dinner on Friday we made the final presentations: medals for contest winners, Awards for top scorers at the various range venues, and the prize drawings. Many incredible prizes were donated for the raffle and were all eagerly claimed.

A variety of meals were prepared by our favorite camp cook, April Hart. Tom Berner gave her a hand and also made daily runs to the store for more. “Prof. Tarts” were popular again this year at breakfast, along with the great Costco muffins, Eggos, and fruit yogurt cups. Of course the coffee urn was running full blast, when it wasn’t throwing a breaker!

Folks started to pack and leave after the Friday evening presentations and raffle, while some watched another movie and stayed the night. The next day the Southern California contingent went up to tour Glacier Park and then headed home. Still others stayed on till their flights were scheduled, with Jason holding the record, flying out Monday morning (7/30/01).

We extend a really big “THANK YOU” to each and every one of you who helped with the 2001 CJA Summer Camp, and made it the resounding success that it was!!

We are planning a Camp Journal 2001 full of articles, 20 or more pages of great candid color pictures, etc. The cost will be about $20 each, but we think it will be a treasure you will read, share and remember for years to come! If you are interested please e-mail me that you would like to purchase one or more.