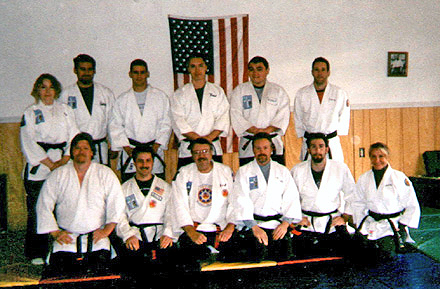 2002 Black Belt Seminar. They were excellent hosts, and if you haven’t had an opportunity, please send them a note of thanks.

Folks started to show up on Thursday for the big event. We had a CJA BOD meeting on Friday night that was very important and which was very productive. Immediately after the meeting, about 9 pm Prof. got everyone out in the dojo for a review of our Black Belt Kempo Katas. Many thanks are due Travis for checking our manual on the fine points to keep us on track. It was a good review and everyone seemed to discover some fine point that needed work.

Saturday, after opening ceremony, formal group pictures, and warm ups we jumped right into Nage followed by problem arts and variations in Shime and Oku. Next Prof. took us through selected and random arts in Shinen. By this time everyone had belly rumbles, and it was time for lunch. After lunch we worked on some Kempo basics, practice fights, and reviewed the Kempo Contest Rules. Around 2 pm Prof. led a review of Tanto, plus variations, and then focused on the completed list of Knife on Knife. By now it was time to shower and get dressed for dinner. Todd and Denise arranged reservations at an excellent Thai restaurant. Half our group got temporarily lost due to confusion over directions, but with a little “Kiai” work, were able to find the place. We had a great dinner, and Todd invited two special martial artists as guests. Prof. gave a short talk and introductions were made. Since it was late and we had a big day coming, everyone went to bed early (HA!).

Sunday we started on Shinrai No Maki, which for many was the first time they had seen this list. We followed this up with a condensed version of Hiro’s sparring reaction training. After a quick lunch, we split into two groups: Bo Review and Shinyo. Both groups thought this was very productive. Then we held the first CJA Kempo contest. Since the event was non-contact, it was necessarily subjective and somewhat problematic due to the limited view of the referee. The two judges, Cory and Jon, helped immensely. After the contest, everyone agreed that they enjoyed the competition, and all “despised” the referee! In fact one competitor lost it, and attacked the referee when he came over to discuss a point. – No problem, it was just Lora swatting at Prof. The highlight of the competition was when Travis unleashed a massive attack on Dan, who tripped and fell backward off the mat, landing in Cory’s lap! The plastic chair Cory was sitting in shattered, with everyone falling to the floor (due to gravity or levity)! … Medals were presented to all the winners, and another group picture taken. Todd, our new manager of contests will have his hands full revising and completing the CJA Kempo rules. We took our closing bows around 5 pm, and prepared to continue the seminar via “Kuchi Waza”.

The fun continued with one of RKK’s Blue Belts making a pile of homemade pizzas for the whole gang. I hate to admit we couldn’t finish them all. Of course we had some liquid refreshment brought in by a group of our stalwart Black Belts. As the evening progressed, some folk went to see the Lord of the Rings (for the 3rd or 4th time), while others chatted in the living room, and still others played poker with gum drops in the kitchen (until about 1 am)! They got so rowdy, I don’t know how the children were able to sleep! Wild!

Early the next day we all piled into vehicles and departed for more JuJitsu “Kuchi Waza” and madness at Disneyland – from about 9 am till about 9 pm. Since it was a holiday there was a bit of a crowd, but that did not interfere with the CJA Black Belts having a great time. We hit most of the major attractions and saw the 45th Anniversary Parade at 7 pm.

There were many interesting and funny things that happened during the weekend, but there is not enough space to put them all down. If you missed this Seminar, you missed a really informative and fun filled weekend. Don’t miss the next one!!!

P.S. We want to add a special “Thank You” to Kris (the girl) and Jon Waggoner for helping with the children during the long weekend. Thanks again guys!