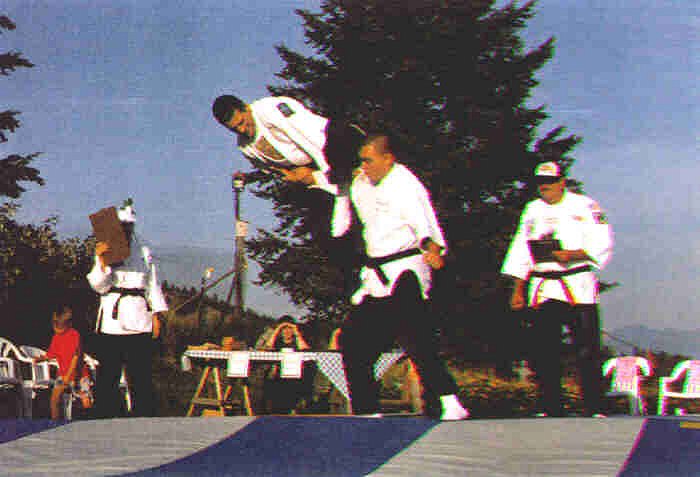 two of the three Jujitsu schools in the state gathered for the state championships in Kalispell, Montana. While the competitor turnout was small the competition was very good. All three types of Jujitsu competition were run: Kata  (a team choreographed form competition); Freestyle (unrehearsed responses to various types of attacks from randomly selected attackers); and Randori ( a one-on-one competition similar to Judo, with throws, pins, and choke holds).

Competitors came from the Missoula area, the Ten Mei Kan, aclub run at the University of Montana by Marcos Baca: and from the Kalispell area, the Shin Mei Kan, a private club run by Gene & Lora Edwards. The Coca Cola company kindly donated over 6 cases of soft drinks for the event. These were sold at the snack bar with hot dogs, chips, etc. to help defray the cost of running the event. Over 60 parents, friends, supporters, and guests showed up to watch the contest. Bud and Ronnie Withey were honored guests, and long time supporters of Jujitsu in Kalispell and Montana. They selected the recipient of the special Sportsmanship Award for the Tourney: Kedre Molinar. It appeared that a good time was had by all.  (Winners listed below)
Pictures: Marcos B. throwing Cory N. a “Climbing Monkey Art” (top right) and a group picture of many of the competitors (bottom left).